I'm looking for a budget-friendly and gaming ready smartphone, any recommendations?

Hello, I'm currently planning to buy a smartphone that is ready for gaming and has a battery that is tough enough to resist draining quickly (3000-5000 mAh}. I'm in a tight budget, I can't afford smartphones worth 400$+ since it's hard to earn money with only my allowance. Any recommendations?

Xiaomi Mi 6 is the phone for you, most definitely. It's price is around $350 but it's the absolute best when it comes the mid/low range price phones. 5.15 inch display, 6 GB of RAM, 128 GB of internal memory, very strong and long lasting battery. And like the cherry on a cake, it has dual 12 MP camera. I can find you a cheaper one, but this the best affordable one i could think of.

Let me know if i am helpful

I would recommend you the Samsung Galaxy J7 Core. It is a budget gaming phone and I think it's only around $200.
My brother is using this smartphone for gaming such as Mobile Legends, Asphalt 8: Airborne and Marvel Future Fight and it runs smoothly even in high settings. This phone can handle some heavy games. I hope you consider buying this. 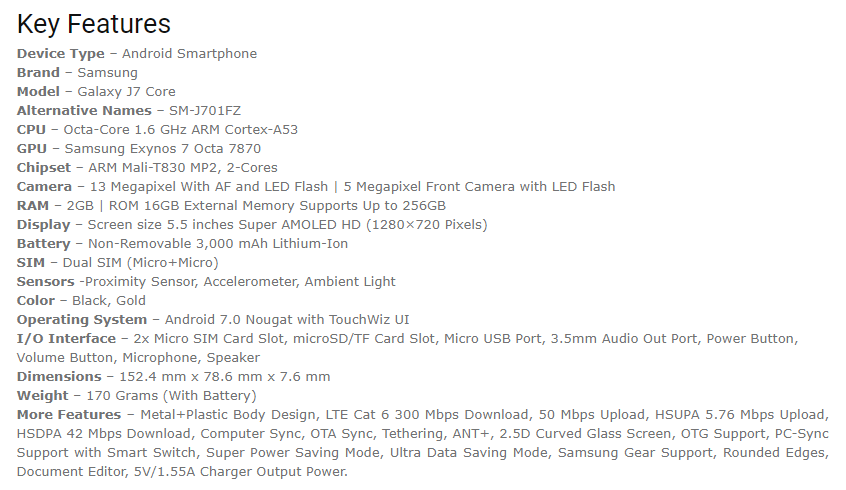 Are you looking to game exclusively on your phone, or do you want to hook it up to a console/controller?

If the former, consider a Motorola Nexus 6. It has a 3220mAH battery and a large 5.96" screen. It runs for about $220 to $300 on Amazon. However, I would only recommend this if your phone's primary function is gaming. Since Google has moved on to the Pixel, security updates have ceased and the Nexus 6 is not very well-supported. If you don't like the sound of this, here'sa list of similar phones to check out.

Any newer Samsung phone will also handle almost every app just fine. I suggest the Samsung Galaxy S7, which is an old flagship that still holds up well. It has a 5.1" 1440p screen, 3000mAH and 4GB RAM. You can buy refurbs on Amazon or from Samsung, though Samsung is out of stock for the S7 right now. Certified refurbs are going for $220 to $380 right now, so well within your budget.

If you're looking for a larger battery, I was very satisfied with the S7 Edge, which has a 3600mAH battery, is 5.5" and comes with a handy Edge panel. Please note, however, that colours might look off if you tilt the screen too much, so if you're very picky about cinematic colours, see if you can find a physical model to test first. The S7 Edge runs from $320 to $500 on Amazon.

If the latter, look at a Sony Xperia Z3. It has native Dualshock support, has decent + appropriate specs (3100mAH battery, 5.2" screen, 10-finger multitouch) and goes for dirt cheap on Amazon, ranging from $150 to $215. Please note that it may be difficult to find one with a valid warranty, however, since it's no longer being manufactured.

Hi there @Chewix . Recommending a phone is a hard task simply because you need to "personally" tried the phone first before you can recommend to others.

What I can suggest is the Asus Zenfone 4 Max (ZC554KL). Personally I tried this phone for gaming; Lineage 2 Revolution, Heroes of Incredible Tales, Dragon Nest SEA, and other MMORPG games. What I can brag about this phone is that it has 5000 mAh Li-Po battery that can extend your gaming experience to some extent compared to other competing brands. I personally used this phone to play Lineage 2 Revolution along with my friends and after several hours of playing I noticed that my friends tend to resort to their powerbanks and others quit the game to charge their devices, but with this phone you can still continue playing with several juice left on your phone. The sad part is you're all alone because your companions will eventually leave you to charge their mobile device . In any case, when it comes to battery performance this is a must have for a heavy gamer.

Another thing is, this phone sports 3GB of RAM . For its price range, with just below 200$, you can experience superb multi-tasking experience. You can play your favorite game while chatting your friends and family members through messenger without any lags or delays when you switch in between applications.

The price of this highly compact phone is just reasonable. With just under 200$ and with a positive specifications on spreadsheet I believe this is the most bang for the buck kind of phone to have.

Chewix said:
Hello, I'm currently planning to buy a smartphone that is ready for gaming and has a battery that is tough enough to resist draining quickly (3000-5000 mAh}. I'm in a tight budget, I can't afford smartphones worth 400$+ since it's hard to earn money with only my allowance. Any recommendations?
Click to expand...

Hi Chewix, I recommend if you'll check Vivo's gaming phones. I provided the link below so that you can check fo further details. As a vivo user, I can say that vivo never disappoint me so far.

The best budget-friendly and gaming ready smartphone that I could recommend to you is the Samsung Galaxy S8 because whether you go with the Galaxy S8 or the slightly larger S8+, you'll be getting an outstanding device that can handle pretty much any game you throw at it.

It features a brilliant AMOLED display capable of scaling up to QHD+ resolution- that's 2960 x 1440. Depending on your region, the Galaxy S8 is powered by a Qualcomm Snapdragon 835 or Samsung Exynos 8895 processor with a beefy 3,000mAh battery tucked into the phone's thin frame. It combines beautiful design with raw processing power to create a phone that delivers all the gaming action you can handle with nary a hiccup in gameplay.

On top of just being a fantastic phone with top-tier specs and a brilliant display, Samsung has done a great job of revamping the Game Tools first introduced on the S7. If you're serious about mobile gaming and can afford the upgrade, the Galaxy S8 or S8+ is a quality investment to make.
M

You should try OPPO F1s. The quality of the camera is excellent. It also have finger print security access. It features display are also high and the processor.

If you want a really affordable phone that has a very solid performance, go with the Huawei Honor Play. It is even more cheaper than the Xiaomi Pocofone F1. Both of them should suffice your need though. But Huawei is more durable (I think) and more popular than Xiaomi devices.
E

XiAOMI Black Shark, which is typically design for the game, snapegradon fastest CPU, and almost real time to the server whilke playing with the cloud almost without stopping screen, and the coor display also the quality more than movie which is about high pixel and colorful putput of game playing demanding.
You must log in or register to reply here.
Share:
Facebook Twitter Reddit Pinterest Tumblr WhatsApp Email Link
Older threads

In the World of Phablet!

Which phones are the most music friendly?

Which iPhone other than 8 and X would you recommend?

Which tablet should i buy?

How to check if your smartphone with OTG connection or not?

Hi there! I'm Mari, so nice to meet you all