What to do if iPhone runs slow

Replacing batteries can be a great way to improve performance, if the iPhone has been used for a year.

According to technology companies in United States, smartphones are going to be fixed to reduce performance once the battery down; to avoid the situation, the device is all of sudden off the supply. Responding to Apple's claim, many customers express anger at the company's failure disclosing the "feature" publically. Some users have been sued by Apple for causing the iPhone maker to slow down "causing economic damage and other problems" to them.

Why did Apple do that?
Some users who have encountered the status of iPhones are self-crashing despite a few percent of battery life.
Apple then silently released software updates to prevent this situation, which reduced the performance to reduce battery consumption. US Technology Company confirmed the correction is only to fix the problem, not to attract users to buy new iPhone. But experts say that Apple has better ways of solving these problems. One of the options is that, users are allowed to turn on or off performance in settings. This is also a reasonthat makes iPhone to get slow down. Or Apple can make easier battery replacement,such as discounting the service.

Which iPhone is affected?
In theory, Apple could slow down all old iPhone models. However, the company claims oninterfering in certain models.
Manufacturers made their debut last year for the iPhone 6, 6 Plus, 6s, 6s Plus and iPhone SE.
Recently, the company added to the list of iPhone 7 and 7 Plus, through iOS 11.2 update. Apple said it plans to apply for other models in the future.

Settings to speed up iPhone
Before replacing the battery, make sure your iPhone is not slowed down for other reasons. Your device should be updated to the latest iOS, and install the latest version for all apps. In addition to fixing bugs and adding features, the following versions can limit the status of iPhone running slow and help patch vulnerabilities.
Also, check your iPhone has enough free memory. Go to Settings> General> Storage & iCloud Usage to proceed to freeing up memory. Users can also use services like Google Photos or Dropbox to store photos, videos and then delete them on the iPhone.
Other options for accelerating iPhone include turn off background services, location-based settings for individual apps, and turn off motion effects. 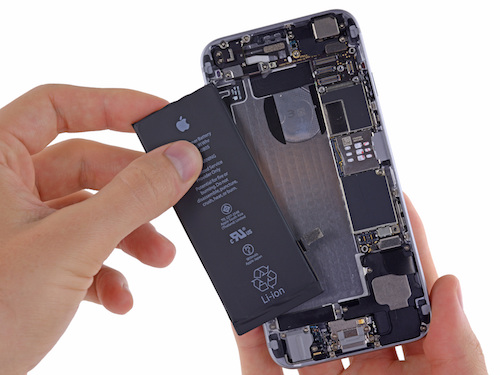 If you find your iPhone slower by battery, you can replace it with a new one. Of course to do this, users mayneed support of technicians.
At Apple's service centers, the cost of replacing the battery is $ 79 (about $ 1.8 million), which takes 3-5 days. Some outlets also offer this service at a lower cost, however users should consider credibility points to avoid replacing poor quality batteries.

What to do to extend the battery life
iPhone uses lithium-ion batteries and its performance will decrease over time or depending on usage conditions. According to Apple, after every 500 cycles of charging, the battery performance on the device dropped at 80%. If used correctly, the iPhone battery will last longer.
Make it too hot or too cold. If the phone is hot, it is best to turn it off and allow it to cool before turning it on again. When not using the unit for a long time, you should charge at least 50% of the battery before storing it. Since storing more than six months,make sure to charge the battery before use.

Great post, very well written and very educational. I love how it's also universal so it can basically apply to almost every phone. Lagging and slow running phone is such a big deal nowadays, especially because people always install way too many unnecessary applications that are "killing" the phone slowly.

Hopefully this will help a lot of people, it definitely made my mobile friend run a little bit faster
Can you also recommend any application that will clean out all the unnecessary stuff?
Thanks a lot, by the way

I usually restart my phone and keep it like that for several hours.If that does not work, I heard, and it was proven correct in my case, that putting your battery in a fridge, covered with something should help as it helps battery to last longer and kinda freezes it to allow it more energy.
Also, disabling apps and deleting those you do not use is always helpful.

This is very helpful in all aspects, remember a phone is a good one when it still have battery power to be on and used for the purpose it was bought for. I believe that the best easy way to working towards having a good battery life in one's device is buying a device with higher battery mAh.

This would aid the device to last longer once its charged and even when several applications runs on it. Also having a higher RAM would aid in this case as well.

Is it okay to have the battery replaced in a non apple store? I think it is too expensive to have it replaced in Apple service centers especially if it is no longer covered by the warranty.

This is a very good content. If my iPhone runs slow, what I usually do is to check first my iPhone storage if how many GB was used. After that, I restart my phone, and like what you're doing, I also update the latest IOS to somehow fix the problem.

I have a few types that you can use to fixe your iphone battery :

Nice. I am an iphone user and I am planning to change the battery. Thank you for the tips, I haven't updated my phone to the latest IOs yet. Good thing I have read this one.
Anyway, I've been moving my photo's and some music to my PC to free more memory. I haven't experienced my phone running slow yet, maybe it also depends on how you use the phone. Some are using it while charging, and some aren't aware that the memory is already full.
So, thank you for this post.

There are few scenarios why phones are getting slower. Maybe the storage of your phone is full. Using high-end apps. Your phone is not updated. When the phone gets hot the system will run slower.

About the updating part that I mentioned. If your phone is not the latest release then your iPhone may run slow before you updated. I read some articles and Apple actually did not deny these accusations that they are slowing down the old phone on their latest updates. What I understand about their reason is they need to slow down or decrease the performance of all the old phones so that the battery life of that phone will not end quickly.

Most of the time it is because the cache of the mobile might be full. so we need to clear it frequently also make sure that the OS is up to date with the latest software. nowadays with each OS release they are tweaking the performance which improves the overall performance of the mobile.

I'm an iphone user, my phone starts to run slow when I upgrade to IOS 10.3. What I did is I contacted apple support and ask for a donwgrade. Now my phone operates an IOS 9 and its running back to its normal pace.

In my experience, the best way to get your phone running up to speed is to clear out its storage of any unnecessary data. Your old pictures and videos can be stored on a separate thumb drive, giving your phone much more storage space. Another thing that takes up a large amount of storage on your phone is saved messages. You’d be surprised how much storage space you get back once you delete all your old messages!

Constantly keeping your phone’s hard drive neat and tidy can increase the overall performance of your iPhone. Battery life may be longer and the phone will definitely process tasks much quicker. Hope this helps!

This is really helpful, thank you for this! I usually experience this-my phone slowing down. I tried and deleted some of my files and photos and stored it on Dropbox. Next time I'll try and use the other ones listed here too.

If someone could write the step by step process how to speed up old iPhone, it would be really helpful.

Yes these mobile phones are made only for a few years, so the person is forced to buy another last few years, and companies continue to bill

When you buy a new phone you will notice the speed is exceptional and the apps don't hang but with time the phone starts to be sluggish wondered why ?The new versions are no longer made as they used in the past they don't have the same software as before. If this happens just install a custom ROM that does not contain bloatware which will help with the speed of your phone.
You must log in or register to reply here.
Share:
Facebook Twitter Reddit Pinterest Tumblr WhatsApp Email Link
Older threads

How to check battery health of your smartphone

How to check smartphone battery health without any apps

How to Remove Duplicate Contacts on iPhone

How To Remove Duplicate Contacts in Android

How to use iPhone X when without Home button

3 features of camera worth on iOS 11

Oct 30, 2019
Rodney Olson
Recommended threads
J
Why Choose Vivo out of the other smartphone brands?

Best Apps for Recording Calls on Android and iOS?

Fuchsia and the future of Android

Is it worth swapping an iPhone 6 to ASUS Zenfone 5.5?

Should I buy the iPhone XS Maz 2-3 years from now?