At first glance, there are no changes, but it is not. Immediately strikes a shifted fingerprint scanner . Now it is located directly under the main camera , and not on the side of it. In the Galaxy S8 model, she constantly suffered from finger pressing in the search for a sensor. Now find the scanner, without affecting the lens, it became much easier. And the rear panel looks more symmetrical.

New devices from Samsung have an unlimited screen, in which there are no left and right frames. At the same time, the diagonal devices declared by the manufacturers do not take into account the side areas. So, for the Galaxy S9, the full size of the display is 5.8 inches, and the passport size is 5.6 inches . For the Galaxy S9 Plus, these parameters are 6.2 and 6.1 inches, respectively .

The arrangement of the buttons on the front and side panels remains the same. It is worth noting the appearance of stereo sound in both versions of smartphones. The role of the second media speaker was conversational, located above the screen. Three color solutions for new devices are offered:

Displays of smartphones Galaxy S9 and Galaxy S9 Plus are presented in the form of a familiar matrix on organic light-emitting diodes - Super AMOLED . Both gadgets have a resolution of 2960x1440 pixels , with a 9: 18.5 aspect ratio . According to the developers, in the expanded version of the S9 Plus display with increased margin of brightness . As for the screen, there were no significant changes with the previous model from Samsung.

In the equipment of new products of the Korean company there was an upgrade . Changes are seen not only in comparison with the previous model, but also depend on the sales region. For the United States and China, Samsung will supply Galaxy S9 and Galaxy S9 Plus smartphones with a Snapdragon 845 processor with a clock speed of 2.6 GHz per core, and for other regions it is offered a filling in the form of a Samsung Exynos 9810 chip with a frequency of 2.9 GHz. For the graphics will respond, respectively, the GPU Adreno 630 and GPU Mali-G72. 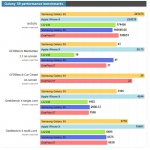 Despite the claimed superiority in the figures of the second assembly, the Qualcomm processor proved better in many tests and games. The standard model received 4 GB of RAM , while in the Galaxy S9 Plus - 6 GB of RAM . Both smartphones are available in versions with 64 GB and 256 GB of internal memory with support for an external microSD slot up to 400 GB.

The standard model of the smartphone has a lithium-ion battery with a capacity of 3000 mAh , and the Galaxy S9 Plus has a battery of 3500 mAh . Both devices support wireless charging. A full charge cycle from 0 to 100% takes place in 70 minutes.

In this indicator, the developers of Samsung made a serious step forward , introducing in their new flagships a unique camera. It, like the human eye, is able to adapt to the level of illumination, automatically changing the aperture in the range from f / 1.5 to f / 2.4 . Both smartphones have a main camera of 12 pixels. But the model Galaxy S9 Plus is equipped with an additional module with a telephoto lens and fixed aperture f / 2.4.

Among the main features of the new camera of two representatives of the Samsung Galaxy S9 series is a slow-motion SlowMo with a frame rate of 960 / s at a resolution of 1280×720 pixels . Recorded videos of 0.2 seconds can be sent to friends and installed on the screen lock the smartphone.

The Galaxy S9 Plus model pleased fans of the original applications . In it there is a function of Self-Majesty . It allows you to receive animated copies of your selfies and send them as emoji in social networks. The front camera in both versions is the same - 8MP. If you want a completely new device with a unique camera, hurry up to buy a smartphone Samsung Galaxy S9 Plus . In addition, the new flagship from Samsung supports the instant transfer function. To do this, you need to point the camera at the image (in any language of the world), and the device in a couple of seconds will translate it into a language you understand.
P

Samsung is one of the best brand and launched a lot of best phone. Every phone has unique features. I love smartphones such as business phones. Because I'm business man and I did my a lot of work on my smartphone. Thanks to Samsung.

phonecorridor said:
Samsung is one of the best brand and launched a lot of best phone. Every phone has unique features.
Click to expand...

I agree with you but the latest model is always having better features than others.

Chris Crocker said:
I agree with you but the latest model is always having better features than others.
Click to expand...

I concur with you that Samsung is the best phone provider. These two models have great features.

phonecorridor said:
Samsung is one of the best brand and launched a lot of best phone. Every phone has unique features. I love smartphones such as business phones. Because I'm business man and I did my a lot of work on my smartphone. Thanks to Samsung.
Click to expand...

Samsung is one of my best choice. It has alot of great features. Its storage is much enough for me to install apps with a higher mb or gb. The camera is so nice, and it really makes you stand out!

Have you tried iPhone?
If yes, I think you also say I am a fan of Apple and it is one of best smartphone I have ever had, of course is, beside Samsung smartphone

marian0302 said:
Samsung is one of my best choice. It has alot of great features. Its storage is much enough for me to install apps with a higher mb or gb. The camera is so nice, and it really makes you stand out!
Click to expand...

There's a big advantage with the Galaxy S9 Plus especially with its feature against regular Galaxy S9. It only differs in pricing because for the Galaxy S9 Plus, at least add an extra $100 to the usual prices, though it depends on where you buy it.
You must log in or register to reply here.
Share:
Facebook Twitter Reddit Pinterest Tumblr WhatsApp Email Share Link
Older threads

How to improve performance of your smartphone on Windows Phone

Tips to improve Performance of your smartphone on iOS

COLMI T3 - A Hybrid of Smartwatch and Traditional Watch