Despite the huge choice of smartphones in the modern electronics market, two flagships can be unequivocally distinguished, which deservedly occupy a leading position in world ratings and sales lists. One of them was Apple's product - iPhone X , which competed with the equally popular smartphone from Samsung - Galaxy S9 Plus .

Unequivocally choose among them the best device does not work: each has its own distinctive features and advantages. Let's compare in detail the main parameters of these models, so that each user determines for you a more preferable option. 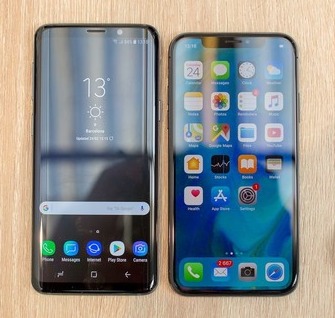 Design
This is not the most important parameter when choosing a smartphone, however, premium devices simply have to look like their status. Both devaysa succeeded equally. Samsung Galaxy S9 continues the line of frameless smartphones.

Unlike previous models, the screen takes up an even larger area of the front panel , grabbing the side faces. In this case, the iPhone X also has minimal indentation along the perimeter of the display, not counting the top "island" with the front camera and a lot of sensors. Some users may find this inconvenient and attributed to the shortcomings of the iPhone.

The body of the two flagships is made of durable glass with an oleophobic coating and metal inserts. Keep these devices in your hand nicely, and your finger on the display slides more smoothly. Despite the fragile and sophisticated appearance, both smartphones meet high standards of protection .

Galaxy S9 belongs to the class IP 68 and can be underwater at a depth of up to 1.5 meters without harming the operation of the device. iPhone X meets the requirements of the protection standard IP 67 and can work for half an hour at a depth of 1 meter.

The tenth iPhone can be bought in two colors:
In this respect, Samsung Galaxy S9 manufacturers were more loyal to customers, releasing more options:
Performance of Apple iPhone X and Samsung Galaxy S9
To compare this feature, let's use the parameters of the older Samsung model - Galaxy S9 Plus. The hardware part of the device is represented by the ultra-modern Exynos 9810 processor (analog Qualcomm Snapdragon 845), which runs on eight cores (4 with 2.9 GHz for complex tasks and 4 at 1.9 GHz for energy-efficient mode) and has a built-in graphics accelerator GPU Mali-G71 MP22. Such equipment, supplemented with a 6 GB RAM module, is able to cope with tasks of any complexity.

The heart of the new iPhone X was the 64-bit A11 Bionic chip with a motion coprocessor and an integrated graphics accelerator. RAM iPhone is represented by a more modest 3 GB module. But, nevertheless, for many performance tests, Apple's product showed better results than its competitor. In fact, both smart phones are good at the most difficult tasks, working at high loads quickly and without overheating.

Duration of autonomous work
The nominal capacity of the Galaxy S9 Plus battery is higher than that of the iPhone X and is 3500 mAh versus 2716 mAh. However, not always an advantage in figures plays a decisive role. The battery life of the two devices is approximately the same and is about 10 hours of continuous active use. It all depends on the screen brightness and application requirements.

Samsung Galaxy S9 and the tenth Apple iPhone support wireless, as well as fast charging. For two devices in the kit are standard batteries, so more functional equipment must be purchased separately.

Practicality of smartphone operation
Both flagships have a fairly simple and intuitive user interface. Developers in their products realized the ideas of minimalism and functionality. For ease of use of smartphones, each model has its virtual assistant, controlled by artificial intelligence . At the same time, many experts concluded that the Apple Siri assistant works flawlessly, practically without making mistakes even if the question is not posed correctly.

Helper Galaxy S9 Bixby is constantly progressing, but less functional than its direct competitor. In addition, artificial intelligence from Samsung does not perceive Russian speech , which is important for domestic buyers. Another significant difference in the functionality was the appearance of an animone Animeji - an animated cartoon copy of the user's face, created by the TrueDepth recognition system. The developers of the Korean company responded with a similar, but less popular option, Selphimoji.

The Face ID recognition system in the Apple iPhone X is the only way to unlock the device . With the front camera and several sensors, the system creates a three-dimensional projection of the user's face, while the Galaxy S9 reacts only to the retina of the eye. In addition, you can also unlock the flagship from Samsung with a fingerprint sensor, from which the American developers refused the new model.

For the reproduction of sound in smartphones a pair of stereo speakers answers . At the same time in Galaxy S9 should be allocated increased, in comparison with previous models, the volume level. When using the headset, some inconvenience may arise for fans of Apple products. The new iPhone X has a Lightining connector that does not support standard headphones. To connect them you need a special adapter.

Display
Apple iPhone X and Samsung Galaxy S9 Plus are equipped with new generation displays: Super Retina and Super Amoled , respectively. These are modern matrices manufactured using OLED technology . Therefore, both devices provide excellent performance in color reproduction and image clarity. These screens have the widest viewing angles and sensitive brightness adjustment, depending on the level of ambient light.

Smartphones have identical diagonals of 5.8 inches. At the same time, the resolution of the Galaxy S9 Plus is 2960x1440 pixels, and the iPhone X - 2436х1125 pixels. Due to the high detail of the matrices, the difference is almost impossible to observe. Displays of two devices have non-standard aspect ratios:

This innovation can cause some inconvenience when running applications that are not adapted to the new standard.

Camera
This is another important criterion in comparing the two flagships. If we talk about the main camera, then immediately note the dual module iPhone X , represented by a wide-angle and telephoto lens, 12 MP each. This combination allows you to take pictures of the best quality. Also, it is worth highlighting the optical stabilization of lenses and the possibility of a twofold approximation of the frame without loss of clarity. The wide-angle module of the main camera of the iPhone has aperture f / 1.8, and the telephoto lens - f / 2.4. This gives you complete freedom when shooting with different levels of illumination.

The Galaxy S9 Plus smartphone, like the new iPhone, supports video shooting in 4K resolution at 60 cd / s. At the same time, in the Full HD format, the South Korean flagship can shoot with a record of 960 fps, while the limit for the iPhone X is 240 fps.

Comparing the front cameras of devices, it is worthwhile to note the advantages of the product from Apple:
The front camera Samsung Galaxy S9 has quite a wide functionality, but in general is inferior to a more advanced competitor.

What kind of smartphone to choose
Choosing between the two flagships of the iPhone X and Galaxy S9 Plus, you need to consider their cost. In the online store MobilePlanet iPhone averages more expensive than a smartphone from Samsung at $ 100 -150 $, depending on the amount of internal memory. In this case, iPhone X does not support external memory slots, which makes the purchase of Galaxy S9 with the possibility of later expansion of the storage capacity more profitable.

Is it worth waiting for the revaluation of these smartphones and reducing their value in the years to come? To answer this question with a certain specifics is rather difficult. Probably, expect a slight decrease in the price of the iPhone X and Galaxy S9 Plus over time. Everything depends on the level of their sales and technical progress in the following new items from Samsung and Apple.

The main advantages of Samsung Galaxy S9 Plus:
Advantages of the iPhone X:
Despite the similarity of many functions of the two flagships, the differences between them are still much greater. Therefore, the answer to the question "which smartphone is better?" Each user can have its advantages and it depends on your choice.
You must log in or register to reply here.
Share:
Facebook Twitter Reddit Pinterest Tumblr WhatsApp Email Share Link
Older threads

How to improve performance of your smartphone on Windows Phone

Tips to improve Performance of your smartphone on iOS

COLMI T3 - A Hybrid of Smartwatch and Traditional Watch

If Apple made an iPhone with Android OS, would you buy one?

Samsung Galaxy S9 or Apple's iPhone X - which one is better?